Anxiety attacks are periods of intense anxiety, or panic that often occur suddenly, and with no warning. They affect the mind, but more so the body, and can cause extreme fear for the sufferer — especially those who’ve never before experienced such a thing — as the symptoms mimic those of other, more severe maladies.

What is an anxiety attack?

To use the more technical term, a panic attack can be best described as severe dread or distress, often attended by painful physical symptoms that can include dizziness, sweating, a racing heart, chest pain, shaking, or numbness. And then there’s what’s going on inside the mind.

A typical anxiety attack will last five to 10 minutes, during which the sufferer will experience extreme thoughts that might lead them to believe they are going crazy, or that they’re dying — none of which is true.

What causes an anxiety attack?

Stress. Remember, last week, when we talked about stress, its effects on the body, and the subsequent ‘fight or flight’ response? The same concept applies here. Stress can lead to panic, which leads to a chemical reaction in the body, which leads to feelings of anxiety and apprehension.

Panic attacks often seem to come out of nowhere, but they can be triggered: By a lack of sleep; by traumatic life events, such as loss; by drugs, alcohol, or caffeine; or by specific chemical and hormonal imbalances.

If you believe you may be experiencing an anxiety attack, take a deep breath, and know that anxiety attacks are highly treatable. 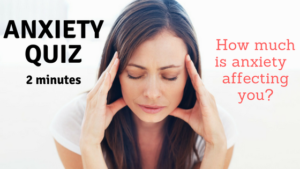 Since most symptoms of a panic attack mirror those of a heart attack, most first-time sufferers end up in the emergency room. It’s always a good idea to rule out any physical conditions that might be causing the symptoms of an anxiety attack. Once you’ve determined that what you experienced in Washington DC really was a panic attack, a few simple lifestyle changes — such as adequate sleep, exercise, and the basic skills of mindfulness (detailed below) for as little as 10 minutes per day — will greatly reduce the severity of, or eliminate panic attacks altogether.

What is the best way to treat an anxiety attack?

The physiology of stopping an anxiety attack is incredibly simple yet profoundly elusive in a moment of panic. The scientific reason for a panic attack is this: Your brain and body’s natural defense system — the stress response — shifts into high gear.

If you were running away from your neighbor’s pit bull, the major stress chemicals, adrenaline and cortisol, would be needed to help you leap over the chain-link fence fast enough to avoid a nip from the dog. If you were a zebra, once the threat was gone you would mindlessly resume your activities of munching grass.

Zebras don’t get ulcers (or have panic attacks), because they have no prefrontal cortex — that part of the human brain which imagines or re-lives the experience of stress. When your thinking cortex hasn’t hijacked your body, your parasympathetic nervous system naturally kicks in, to soothe and calm your body with just the right cocktail of chemicals.

This is called the relaxation response.

The solution to a panic attack is already inside of you.

Comforted yet? We’re getting there.

You are not defective; your mind and body are not betraying you.

In fact, the opposite is true. Your mind and body are functioning perfectly during a panic attack — perfectly in response to stress, real or imagined.

Researchers and psychotherapists in Washington DC have uncovered the antidote to disorders of the mind and body caused by anxiety and fear:

How simple is mindfulness? In the most basic form, mindfulness is the focusing of your attention with the goal of diminishing simulation.

To enhance the effect of mindfulness and engage your relaxation response fully, deepen and slow your exhalation and pull your next breath in deeply using rise of your belly to expand the bottom lobes of your lungs. For eight breaths focus only on the sounds of your breath, the feeling of your belly rising and the sensations everywhere in your body — without judgment or analysis.

Simply begin to notice what you are feeling.

Eventually your mind will quiet itself, and begin to wander less. Through the practice of mindfulness, you will learn how to not jump on the endless freight train of thoughts produced by your wonderful and imaginative neocortex, so you can remain still, calm and at peace.

Have panic attacks become a frequent, maybe even debilitating part of your life?

You may have panic disorder — and you’re not alone. Nearly six million American adults suffer from panic disorder. One of Washington DC’s leading psychotherapy and anxiety counseling practices, Keith Miller Counseling & Associates, can help you unlock the potential of your mind and body’s relaxation response.